"We must record these things that were forced upon us."
- Kim Hak Soon halmoni, first Korean surivor to come out publicly in 1991 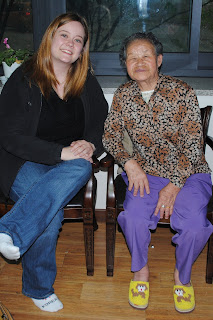 Sitting with a halmoni.  What an honor to sit next to such a brave, amazing woman!
Last Saturday I spent the day at the House of Sharing in Gwanju, Gyeonggi-do (just outside of Seoul).  The House of Sharing is both a safehouse for former Korean "comfort women" and a museum to document and give awareness to these women during World War II.  The house was built in 1992 with funds from a Buddhist organzation and private Korean nationals.  At that time, twelve women resided at the House of Sharing.  Currently, there are nine survivors at the house who have become activists in spreading awareness about what was done to them.  These women are pretty frail, aging around 85-95 years old and have survived sexual slavery - yet, when they moved into the neighborhood, even the neighbors threw rocks at their house.  How could anyone do that?

From 1932 until the end of World War II, the Japanese military kidnapped and/or deceived young women into sexual slavery.  At that time, Korea had a strong farming culture.  When the Japanese colonized Korea, they took away everyone's farmland; therefore, impoverishing many Koreans.  The Japanese military advertised great jobs in factories for young girls who could make money for their families; they had no idea they'd be forced to "service" the military.  Other Korean women were simply kidnapped off of the street.


It is estimated that nearly 200,000 women and girls from all over Asia were taken to serve as sexual slaves for the Japanese military.  It is also estimated that 80% of these women were Korean.  So many of them hadn't even hit puberty, some of them as young as twelve years old.  The Japanese military took these women all over Asia to "service" their troops such as:  China, Taiwan, Cambodia, Phillipines, Indonesia, and Manchuria.  These women had no idea where they were going; most thought the military was taking them overseas to work in a factory.  The photos below show different comfort stations that have been accounted for either by documents, former comfort women's testimonies, or military testimonies.  As you can see they spread all throughout Asia. 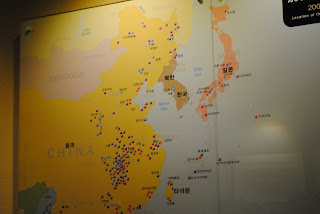 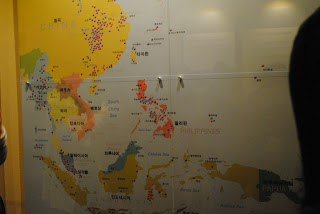 The Japanese government, still to this day, has not given a formal apology to these women.  One argument was that these women CHOSE this.  They left Korea, seeking prostitution.  This is impossible because at the time of Japanese occupation, it was illegal for Koreans to leave the country.  The only international travel was on a military ships.  There was no way any of these women could have physically left the country without the aid of the military.
Each "comfort station" was different.  Some were like the photos below, some were in the back of a truck, and some women report being forced to do it in the trenches during battle.  Some report "servicing" a few men each day, some report up to 50 men per day! 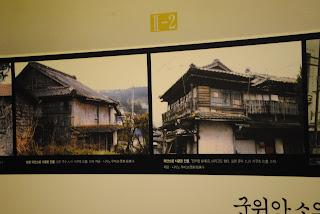 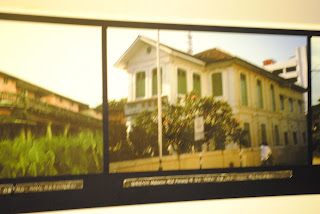 How did the comfort stations work?  Generally, the soldiers could come between 8 a.m. and 4 p.m. and have 30 minutes with one of the women.  The women were given ONE condom and were to wash it out with water between each session.  The men were not allowed to hurt the women; however, many women's testimonies prove otherwise.  Then at 7 p.m. the higher ranking soldiers could come to the comfort station and spend the entire night with a woman.
Did the soliders pay?  This is a big argument with the Japanese government.  Yes, the soldiers did pay to see the women but these women NEVER saw any of this money.  When they were brought to the comfort stations they were given clothing and makeup at high prices in which they were forced to pay back.
How were the women treated?  Terribly.  They were beaten, raped, abused, tortured, hardly fed, and many were killed.  If they thought the women had contracted an STD, they were given a shot of anti-syphilis arsphenamine 606 and mercury vapor treatments that would kill everything in the reproductive system.  These women later would need to get a hysterectomy and would never bear children.
Why didn't the women just run away or fight back?  SEVERAL reasons.  These women were young and scared.  There were beaten, tortued, and threatened.  They watched other women killed.  One woman's testimony says that one woman in her comfort station ran away and got caught.  The soldiers cut her up into pieces and fed her to the dogs, all while forcing the other women to watch as a warning of what would happen if they ran away.
Another BIG reason was that they'd have no where to go.  They had no idea where they were.  No idea even what country they were in, with no money.  Can you imagine waking up and having absolutely no idea where you are.  Where could they run to?
When the war was over, the Japanese military abandoned many of these women wherever they were living.  Because of numerous reasons, shame, guilt, lack of finanical resources, these women stayed in these countries and found whatever work they could.  Eventually, many moved back to South Korea - although many still remain throughout Asia.  Finally, in 1991 a very brave woman, Kim Hak-Soon halmoni came out of the dark and gave her testimony of what had happened to her after her husband had passed away.
These women are incredibly brave and have survived a life I can't even imagine.  Yet, they keep going - protesting, giving their testimonies, waiting for the Japanese government to truly give a formal apology and compensation for what they've done.  Hoping that before their lifetime ends, they receive peace in acknowlegement from the Japanese government.
These women have been to court versus the Japanese government but their case was dismissed because of three reasons.  (I'm going by memory, so I apology if I miss a few details).
Some photos of the halmoni.  "Halmoni" in Korean is a polite way to refer to these women as grandmothers.﻿ 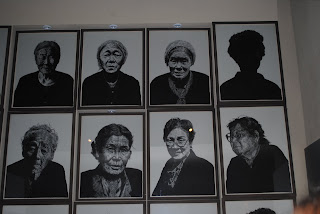 When they built the house, they hired a woman to teach the women how to express themselves through art to heal some of their wounds. 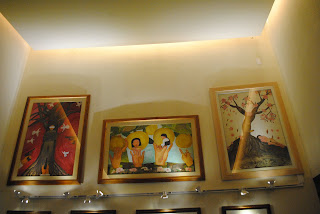 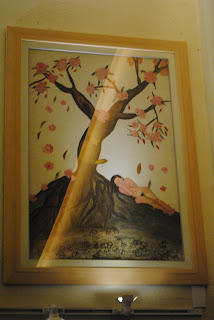 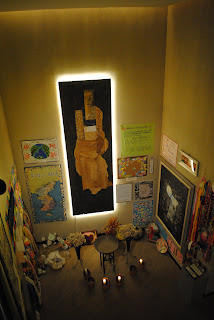 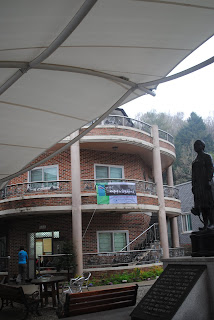 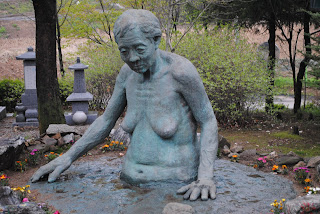 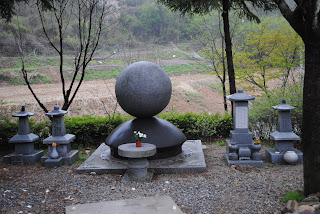 I highly encourage you to check out the House of Sharing if you are living or visiting South Korea.  If not, please check out more information and read some of the women's testimonies.  I cannot give any justice to the pain and suffering these women have encountered in this post.
For more information on the survivors of Japanese Military Sexual Slavery, please check out the House of Sharing's English website:  http://www.houseofsharing.org/ where you can find many halmonis' testimonies.  Or the official Korean website:  http://www.nanum.org/.  There is also a facebook page:  House of Sharing.
Posted by Katie's Korean Adventure at 7:00 AM

Email ThisBlogThis!Share to TwitterShare to FacebookShare to Pinterest
Labels: Korean History, Outside of Seoul/Suwon, Things to do in Seoul