Last weekend I went to a bi-lingual performance of the Vagina Monologues in Seoul.  In case you haven't heard of the V-Monologues, it's a performance made of several monologues about women from all over the world with discussions such as rape, abuse, love, menstration, mutliation, etc...  It's a really hilarious and empowering performance and it was especially great to see it in Korea with a wide variety of perfomers from various backgrounds.

At the end of the performance they ask those with courage who've been sexually assaulted to stand up.  Next, they ask those who have known someone who has been sexually assualted to stand up.  Nearly everyone is standing at this point.  It goes to show how much of an issue this is, that nearly everyone in a crowded auditorium has a friend or family member who has been a victim.

KUMFA is an organization for unwed mothers.  I'm just going to cut and paste some statistics about unwed mothers in Korea from an email I received from VDAY Seoul:


Our beneficiary for this year will be KUMFA, Korean Unwed Mothers Family Association. This organization has very little government funding. Some of these single mothers receive as little as W50,000/month to survive. In addition, instead of being praised for having the strength to raise their children on their own, a lot of them have been emotionally/ psychologically abused and ostracized by society and most times, their own families.
SCARY STATISTICS
- 1 in 3 women in the world will be physically or sexually abused in her lifetime. (United Nations)
- 4 million women are trafficked every year (United Nations)
- Estimated 1 million children (mostly girls) enter the sex trade every year (UNICEF)
KOREA vs. AMERICA
- Nearly 96% of unwed pregnant women in Korea choose abortion. (Ministry of Health, Welfare and Family Affairs)
- Of the remaining women, 68.3% of unwed mothers give up their children for adoption, because of shame, fear, and lack of support. (Korean Women's Development Institute)
- In comparison, only 1% of single mothers in the US relinquish their children. (National Center for Health Statistics, US)
Still to this day, so many Korean babies are given up for adoption and live in orphanages, waiting for an overseas couple to adopt them.  This is something you expect from a developing nation, not a "first world" country like South Korea.  Many babies are sent abroad because it is extremely rare for a Korean couple to adopt a child.

The next day I went to a play written and performed by a Korean-American adoptee.  Her message was that, although she loved and appreciated all that her adopted family has given her, she believes that we need to stop adopting and sending babies overseas, and work to fix the problem on why these babies are being adopted in the first place.  She believes we need to work and support organizations like, KUMFA, in order to keep these babies in their own culture with their own families.

The only dissappointing part of the Monologues was the foreign-filled audience.  There was probably 1 Korean to every 20 foreigners.  I tried to convince some co-workers to go but just saying the word, vagina, makes them too uncomfortable.  However, it was really awesome to see a lot of men in the audience, both foreigners and Koreans.

I didn't take any photos of the performance, only the chocolate that my friend bought for me;) 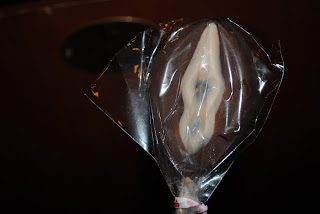 I highly recommend the Monologues, you can often find them around Valentine's Day in average to large size cities in the U.S.
Posted by Katie's Korean Adventure at 9:13 AM