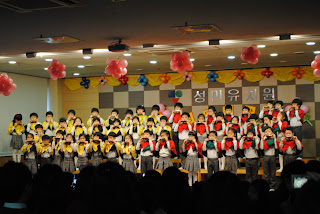 (The photo above is of my students playing the harmonica for their parents at their end-of-the-year concert.)
My initial post was supposed to be of our kids' concert, but somehow I've turned it into a post on Korean education.  Sorry for the mis-matched post...
President Obama has recently been promoting the Korean education system and even addressed the issue in this year's State of the Union speech:
"In South Korea, teachers are known as 'nation builders.' Here in America, it's time we treated the people who educate our children with the same level of respect...If you want to make a difference in the life of our nation; if you want to make a difference in the life of a child – become a teacher. Your country needs you."
Well...Mr. Obama, that's not entirely true.  As an educator in Korea, I will give (try) to give you some non-bias looks on Korean education without going into too many details.  This could be a long, and very controversial debate...and I don't wanna go there!
I found this news clip on BBC and I think it's worth a click:  http://news.bbc.co.uk/2/hi/programmes/world_news_america/8605789.stm
The article explains the Korean government's take on Obama's thoughts.
There is no doubt that Korean children WORK HARD.  The question is:  Do they work TOO hard?
My students are quite young, so I don't quite see the affects like some of my friends who teach older students.  Here are a few quick statistics off the top of my head...
The goal is to get into a very good college and give honor to your family.
Here is a pic of my cute students singing to their parents in Korean. 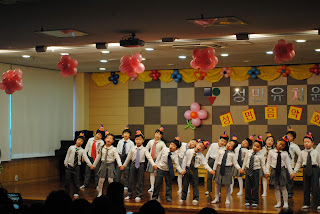 BUT...look at how far Korea has come in the last fifty years!!  They've gone from a war-torn country to one of the highest economies in the world.  Generally, Americans have a complete misunderstanding of South Korea.  It is a developed country with a lot of technology.  North Korea is still stuck in the 1950's with little technology...and they're still making bombs...they haven't gotten past the war...move on, hahaha...
I'm always amazed at how well my students do...here, they are playing the jangu, a traditional Korean drum...with a little silly performance too. 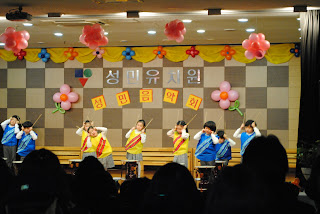 The children are amazing learners, but at what expense?  They spent countless hours memorizing and memorizing...just to forget the information after an exam.  Instead of trying to figure out how to creatively find the answer, they are just memorizing.  If you read the article above, even the Korean government is weary of their education system.  They say the #1 problem with the Korean education system is:  demanding parents!  I won't publicly post my opinions on this!
Koreans work longer hours than any other country in the world; yet they get paid less than the average developed nation.  The most chilling statistic is that they have the highest rate of suicides in the country.  So...is this hard work really paying off?
Here, my students are playing the bambell, an Indonesian instrument.  This instument is made of bamboo and plays sound by shaking it.  I googled this for the correct spelling but couldn't come up with it.  I'm not sure if bambell is the Korean name or the Indonesian name. 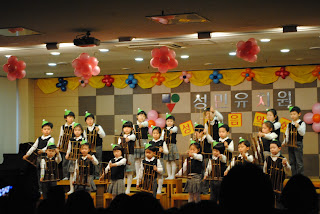 Here's a video clip of the bambell. 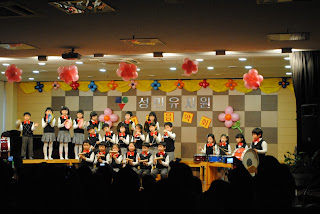 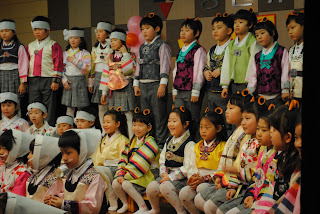 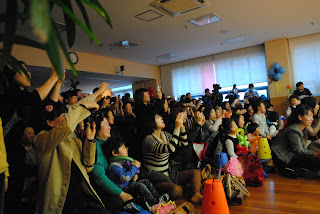 This discussion could go on for days.  I just wanted to shed a tiny little light on the Korean education system since Obama has been talking about it in the media so much lately.  Personally, I don't think Americans could adapt to the Korean system and Koreans couldn't adapt to the American system.  Please don't take me for an Obama-hater (it's REALLY not the case), but I'd like to put Obama through the Korean education system for one week and maybe he'll rethink things...maybe he'll realize his job is pretty easy compared to Korean kids!
Lastly, I believe Korean teachers are treated with more respect than the average American teacher by the students--although they are STILL CHILDREN.  But as far as a "nation builder"...well...I won't put it in my resume!
Posted by Katie's Korean Adventure at 4:42 AM