Shanghai is the birthplace of the Chinese Communist Party.  All over Shanghai, you can find Chairman Mao Zedong, Karl Marx, and Friedrich Engels.  I stopped by a beautiful park, Fuxing Park.  Generally you can find people playing Mah ja dong, doing taichi, or playing cards.  The day I went it was soooo tremendously hot, most people were laying on benches fanning themselves. 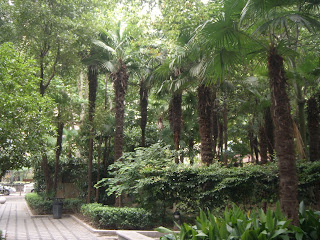 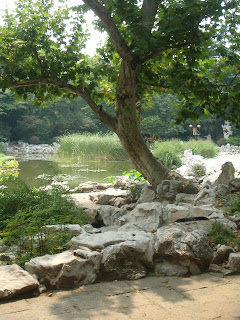 Here, I was greeted by Marx and Engels. 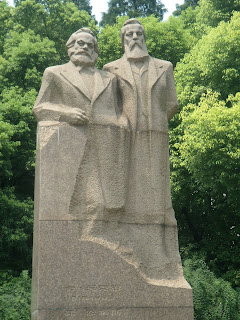 Second, I headed to the place where the Chinese Communist Party all started.  I couldn't take pictures inside, and it was heavily guarded so that I would abide by that rule.  I even got to see the very first copy of the Chinese translation of Mary E Marcy's The ABC of Das Kapital by Marx AND the table where Mao and his revolutionists sat down and put this movement together.  Believe it or not, I was the only non-Chinese person in the entire place!  I got quite a few stares.  It's interesting to read negativity towards your government with a crowd of people watching over your shoulder.  It didn't seem to bother me too much.  I enjoyed making this pilgrimmage to the Chinese Communist Party's most holiest shrine:)
Outside of the building. 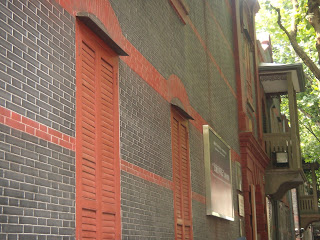 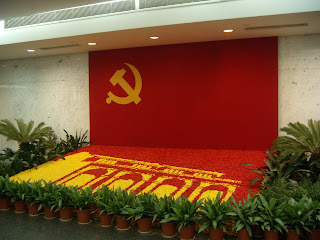 I believe that must say something like, The Site of the First Congress of the Chinese Communist Party. 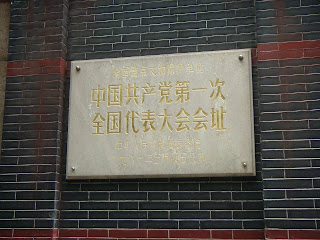 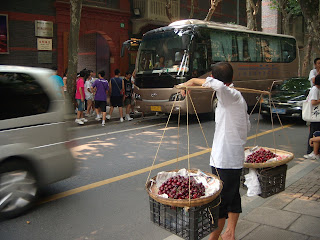 Next, I headed to the Propoganda Poster Art Centre.  When the taxi dropped me off in front of this apartment complex, I felt I was in the wrong place. 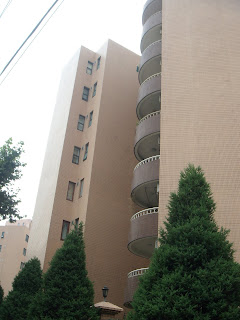 Then, when a man slipped me a business card showing me to go around the corner and into the basement...I felt like this was even more shadey...
However, it turns out this was a great stop.  It seems like this man runs this poster museum in the basement of his apartment.  It was great!  It showcased Chinese around 3,000  original posters from the 1950's, 60's, and 70's.  I knew that I would see anti-USA posters from the Chinese Cultural Revolution, but no idea that I would see so many other types of other posters.  I snuck a few photos, even though prohibited.  Even then, the glare of the glass made most of them impossible to see.  For approx. $5 I bought a book that displays most of the posters in the art center...let me know if you ever want to take a look at it.  My book explains,
"Mao Zedong emerged at a time when a great hero was badly needed in China someone who could rescue the nation from a dire fate after a hundred years of external agression, manipulation and opression....As a tool of the media, the propoganda poster was the most fundamental form of art during this period to carry Mao's voice to the masses."
-Yang Pei Ming
This is what I thought I'd see.  Scarey looking American soldiers being pushed out of China. 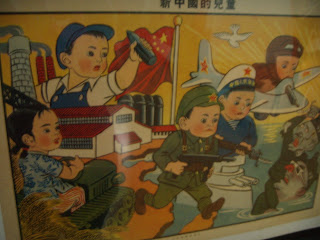 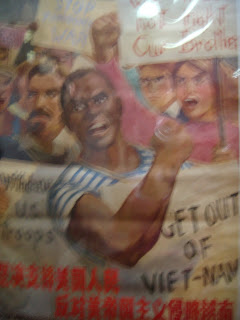 ...and ESPECIALLY didn't expect to see the promoting the Civil Rights Movement in USA. 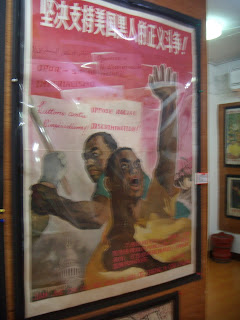 Posted by Katie's Korean Adventure at 5:36 AM