Take Me Out to the Ballgame...

Going to a Korean baseball game is usually on most foreigners' "to-do" lists.  From the moment you walk out of the subway, you can smell the dried squid and KFC for sale.  Everyone is in line to grab their $1 Thunder sticks and there are several vendors outside selling beer, kimbap, and several other things in which I don't even know the name of.  Tickets are cheap and you can bring in outside food and beverages.


I cheer on the Twins.  Yes, the Twins!  Several teams seem as if they are "copycat" teams from American Baseball.  The logos look very similar.  Check out this player's uniform... 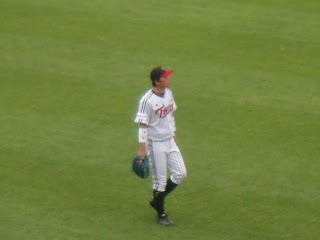 In the stadium, there are a few platforms where cheerleaders stand and lead the crowd in cheers.  Currently, the Twins' theme is...Christmas in July??  So, when it was the Twins' turn at bat--a few Santa Clauses and girls dressed in Santa costumes came out to lead the crowd in cheers.  If you know me at all, I think you can imagine my excitement when the WAVE was pulled out.  We did several versions of the wave:  traditional, slow motion, and my favorite - front to back...very impressive!  I don't know how the cheerleaders are able to communicate to the crowd from across the stadium on which type of wave was coming up...but they did...Amazing! 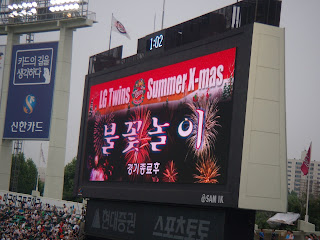 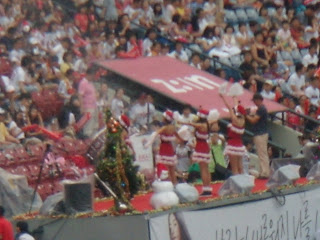 In case you brought your own beer and ran out...have no fear...they still have the beer guys that walk up and down the isles.  But instead of Bud Light in a plastic bottle, you'll get a cold, draught Cass.  I love the idea of a keg in a backpack. 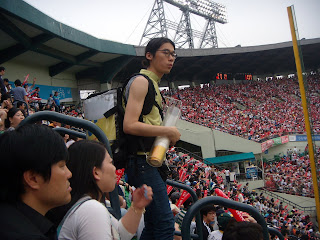 In between innings, we noticed this...I don't think we will EVER see this back home! 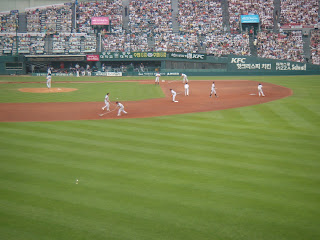 And how could my post be complete without a few videos of the cheering fans at the games...this is what Korean Baseball is all about!  When the crowd points their thunder sticks out, it reminds me of Nazi Germany saluting Hitler.  Each player also has their own cheer and there are actions to go along with it (with the thundersticks, of course).  It's a little difficult for my camera to focus because of the sea of red.
I don't think I've been to a higher scoring game than this.  We left after the 7th inning...Big Rock Brewery sounded too good to wait for.  (Twins are LG Twins) 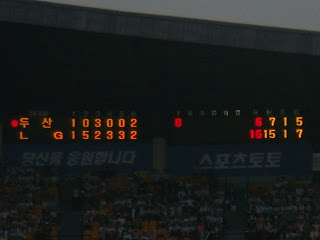 Posted by Katie's Korean Adventure at 2:17 AM