Korean Kids are So Cute! 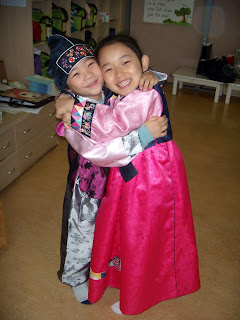 I just realized I hadn't put any pictures of my kindergarteners on the blog yet.  You are in for a real treat.  They are so much fun.  They can be a handful at times, but for the most part they are great.  I am constantly amazed on how quickly they are learning English.  When I took the job, I really didn't think I'd be able to have such in-depth conversations with some of them.  Granted, there isn't a lot of conversation I have with the 3 year olds, but the 5 year old children are amazing!  They seem so much older than they are.  Because Korean age is different, our 5 year old age is really 6 or 7 years old here.  Although I am 26 years old at home, I am 28 years old here :(

I will quickly explain Korean age.  The day you are born, you are one years old.  So, my birthday is Dec 29 and on that day I would be one.  Then, on New Year's Day, everyone turns one year older, instead of turning one year older on your actual birthday like we do at home.  So on Jan 1, I would be two years old, even though I was only 4 days old.

Back to my kindergarteners.  Every month we have a birthday day and we celebrate all the kids' birthdays that have a birthday that month.  The kids wear hanbok, traditional Korean clothing, and the parents bring in cake and treats.


These are some girls who had a birthday in May from my Maple Tree Class.  They are 7 years old (just turning 6 in American age).  Their English names are Sabina, Bini, Ivy, and Sally.  Some of our parents give the kids the craziest names.  McQueen is probably the craziest at my school...my friend has a kid named Peter Pan and another friend has a kid named, Circle!  Just imagine keeping a straight face and yelling, Peter Pan...sit down! 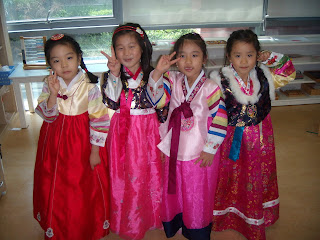 The Maple Tree Class really wanted to take picture!  This is gym day so their uniform in the winter are these bright orange sweatshirts/sweatpants. 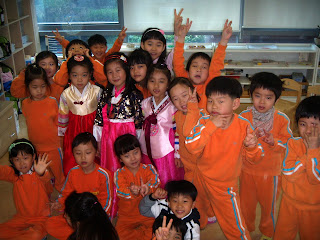 The kids did a performance for their parents.  I happened to sneak by in between classes while they were practicing.  I will add the videos later.  This is the Maple Tree Class again. 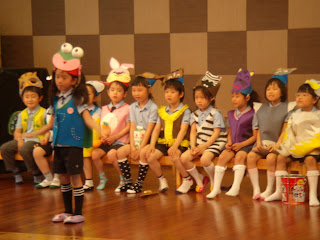 Pinetree class is getting ready to practice. 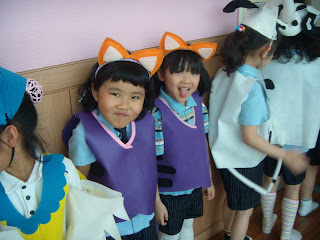 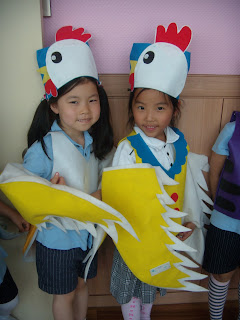 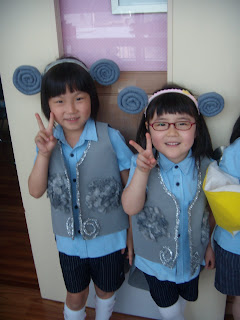 And lastly, HANK.  Afterschool, we have elementary students come for English classes. They are my biggest headache of the day.  Many of the students come before or after other after-school programming.  Hank comes from Taekwondo Class.  One would think he would get rid of all his energy there...but not even close! 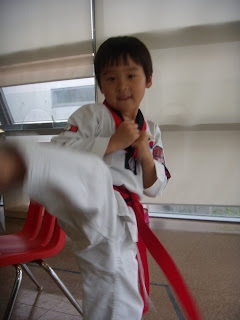 Posted by Katie's Korean Adventure at 2:08 AM

Email ThisBlogThis!Share to TwitterShare to FacebookShare to Pinterest
Labels: my students