I cannot believe the weekend is almost over!

On Saturday night, I took the subway to Seoul for the first time.  The recruiting company I went with, Adventure Teaching, was hosting a party for their teachers.  It was a great time.  I met a lot of cool people.  I even met a Korean who has been to Rochester because his sister lives there!  And his friend is originally from Guadalajara.  It is a small world around here!

So...I guess Koreans can be just as pushy with religion as Americans can be.  I met a lady on the subway who was trying to get me to go to her church.  She distracted me so much that I missed my transfer station.  So I had to go back and it took forever.  I almost had to take a taxi home because the subway was closing.


Today, one of the head teachers from another Sungmin Kindgergarten took me around Seoul.  First we looked around at some tourist-y places to shop and then ate a delicous traditional Korean meal. 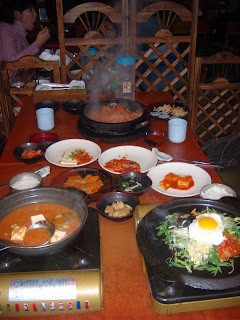 Then we saw a Palace...I cannot remember the name...but I'll get back to you on that one.  It was raining pretty hard so I didn't get very many good pictures.  There was an amazing museum alongside the Palace that explained a lot about Korean history and culture during the Joseon Dynasty...when this Palace was built.  The museum opened only a few months ago. 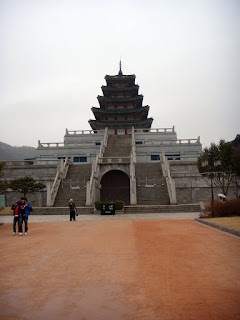 These stones are put in front of the Palace to "guard" the Palace. 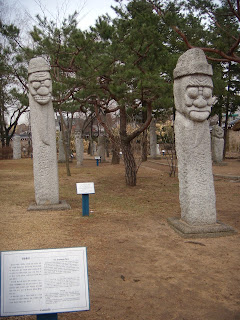 If you are pregnant, you are supposed to rub the nose of this stone statue...if you do, tradition says you will have a boy... 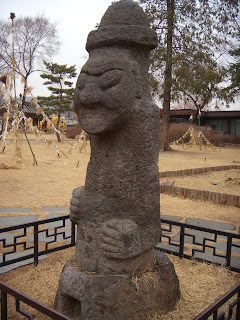 I took this picture to show how modern and traditional culture are intertwined in South Korea. 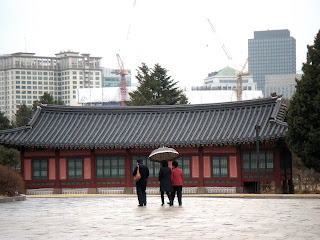 It began to rain pretty hard so we decided to part ways.  I thought I'd stop at the bathroom in the subway station before heading home...when much to my surprise... 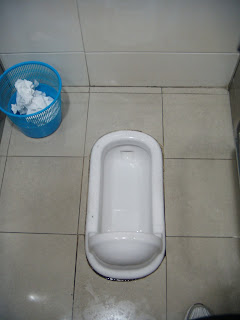 This was waiting for me inside the stall.  I just couldn't try it it.  So I took a picture and left.  I am pretty sure I don't have what it takes to manage this squat.
And lastly...on the way home I stopped at a convenience store called, "Gag Story" to grab a snack.  When much to my surprise I found... 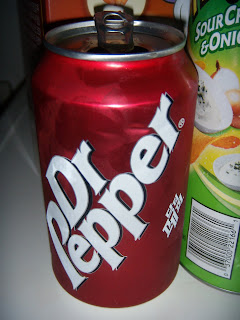 a much better surprise than the last one.
Posted by Katie's Korean Adventure at 5:43 AM